Opening hours can be varied by making advanced bookings for genealogical research or group bookings.

Admission is by a gold coin donation.

The Museum is run by volunteers who give up their valuable time to open on the weekend. Sometimes however due to a lack of volunteers we cannot always open on the designated day and hours. We apologise for any inconvenience if this occurs.

The Rushworth Museum is located in High Street Rushworth in the Old Mechanics Institute Building built in 1913. 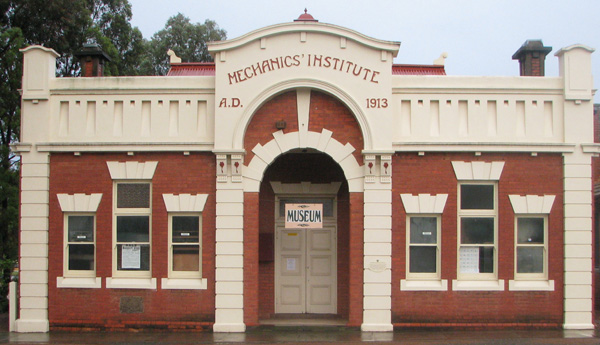 But what are Mechanics Institutes?

Mechanics Institutes originated when all skilled labourers, trades people and Artisans were generally referred to as mechanics. The definition may have become more specific during the industrial revolution when workers became increasingly associated with machinery.

The origin of the Mechanics' Institute is attributed to Dr George Birkbeck, of the Andersonian Institute in Glasgow Scotland. In 1880 he gave a series of evening lectures to local mechanics about new technology. The lectures were extremely popular because Birkbeck offered them free at the time when formal Education was available only to the wealthy.

The lectures led to the formation of the facilities dedicated to providing education and self improvement opportunities to workers, the Edinburgh School of Arts [1821] and the London Mechanics Institute [1823]. They provided libraries, reading rooms, lectures, museums, halls, and meeting places. Soon there was hundreds of Mechanics Institutes and similar establishments throughout the British Isles. The movement quickly spread throughout the colonies of the British Empire. They were particularly popular in 19th century Canada, New Zealand, North America, and Australia, where they pioneered technical education and formed the basic of the modern public library systems. Australias first Mechanics Institute was established in Hobart in 1827.

The movement began in Victoria with the formation of the Melbourne Mechanics Institute in 1839 and in Victoria there have been over 1100 institutes which were created by individual and often remote communities. They served as a focal points and cultural centres for suburban and rural people and provided necessary civic infrastructure.

Institute trustees and committee members were dedicated to the improvement of the cultural, educational and social life of the inhabitants of their local communities. With the passage of time and the creation of municipal educational, welfare, recreational, and library facilities, mechanics' institutes gradually lost their pre-eminence, particularly after World War Two. Today there are over 500 still operating in Victoria as Halls for local organisations.